Here is some information about a Young Driver Intervention project in South Lanarkshire which takes a holistic approach through education and engineering.

Up until 2005 there was a general downward trend in fatal and serious casualties but the next three years showed a gradual increase. At that point the Council’s approach to road safety was reconsidered and two main areas of concern were identified; accidents on rural roads and accidents involving young, inexperienced drivers.

Often these factors coincided with young drivers being involved in serious accidents on country roads.

It was anticipated that by improving the road environment to make it easier for drivers to identify hazards, whilst improving driving standards through better training, the increase in casualty numbers could be reversed.

The Scottish Government has set challenging casualty reduction targets that will take us up to 2020, which South Lanarkshire Council has embraced.

South Lanarkshire Council’s Local Transport Strategy (LTS) identifies road safety and accident reduction as a Council priority and the LTS contains specific policies and actions to contribute to meeting this outcome and we are striving to achieve this.

Strathclyde Fire and Rescue are committed to making a meaningful contribution towards reducing death and injuries caused by road traffic collisions by promoting safe and responsible driving at an early stage.

The problem of accidents on rural roads is not unique to South Lanarkshire, and throughout Scotland rural roads account for approximately three quarters of all fatal road accidents and 58% of serious ones.

Drivers can perceive these quieter roads as being safer than others and as a result can become complacent, leading to reduced concentration and excessive speed.

This is particularly true when the driver is young and inexperienced.

Rural country roads are usually of a variable quality and often contain lower standard bends and cambers when compared to current roads standards.

Drivers are prone to misreading the road layout, resulting in inappropriate speed. Routes were prioritised by calculating the accident rates which were then compared to the national average rates for similar types of road.

Routes experiencing higher than average accident rates were then identified for treatment.

Key to the success of the route action plan programme was ensuring consistency of driver information, in order to reduce the possibility of drivers misreading the road layout.

Several sections of routes were treated with solar powered vehicle activated warning signage. These signs illuminate to warn drivers if they are approaching a hazard, such as a sharp bend or junction, too quickly.

The pass plus initiative

The topics covered in the project are driving in town; all weather driving; driving out of town; night-time driving and driving on dual carriageways and motorways.

The results: improving the roads

The effectiveness of the two aspects of this initiative had to be evaluated in different ways. The RAPs were suitable for “before / after” evaluation using accident statistics on the routes treated…

For the first eighteen routes where RAPs have been installed accident statistics for the period before the work was completed have been compared with those afterwards.

In the three years before the improvements were introduced there were on average 66.01 injury accidents per year on these roads, this has reduced to 23.67 per year, a 64% reduction.

As an injury crash on a rural road costs on average £123,077 the reduction achieved equates to a saving to society of £5.21 million per year. When compared to the cost of £2.42 million for installing the eighteen projects this provides a first year rate of return of 215%.

The results: Pass plus

Annual evaluations of the Pass Plus project has produced the following:

Due to the significant scale of these initiatives it was anticipated that they would result in a noticeable reduction in casualty numbers. This has materialised as the upward trend in fatal and serious casualties identified in 2007 has now been reversed and casualty numbers have shown a significant downward trend since 2008.

The number of fatal and serious casualties during 2010 was the lowest since the Council was formed in 1996 and 35% lower than 2007.

Some conclusions and learnings

Our holistic approach to road safety, by integrating road safety education with engineering measures, in this case for young drivers on rural roads, clearly demonstrates a positive contribution to the casualty reduction targets.

This method is a vital component in our continued drive to reduce the number of accidents on our roads, in particular those with the highest severities. 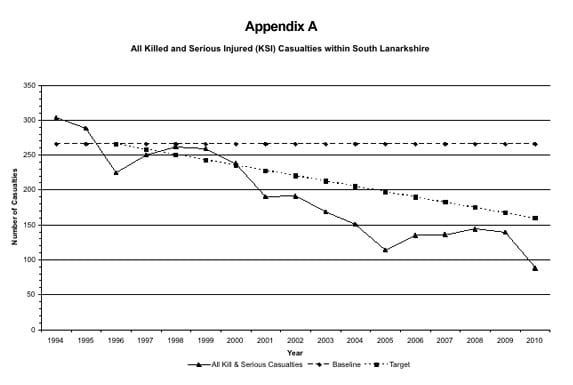